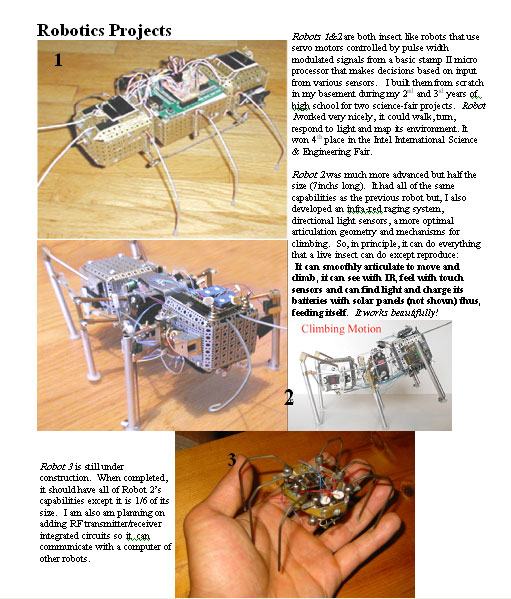 Robots 1 and 2 are both insect-like robots that use servo motors controlled by pulse-width-modulated signals from a BASIC Stamp II microprocessor. The basic stamp is programmed to that makes decisions based on input from various sensors including touch sensors for collision detection and optical sensors for light detection and to detect obstacles. I built them from scratch in my basement during my 2nd and 3rd years of high school for two science-fair projects. Robot 1 worked very nicely, it could walk, turn, respond to light and map its environment. It won 4th place in the Intel International Science and Engineering Fair.

Robot 2 was much more advanced but half the size (7” long). It had all the same capabilities as the previous robot, but I also developed an infrared ranging system, directional light sensors, a more optimal articulation geometry for the legs, and mechanisms for climbing. It can walk, avoid large obstacles, climb over small obstacles, find light sources, and charge its batteries with its solar panels. So, in principle, it can do everything a live insect can do, except reproduce.

Robot 3 is still under construction. It was designed to have all of Robot 2’s capabilities except it is a sixth the size. I was also planning on adding an RF transmitter / receiver ICs, so it can communicate with a computer or other robots.